The highest and average IQ by age 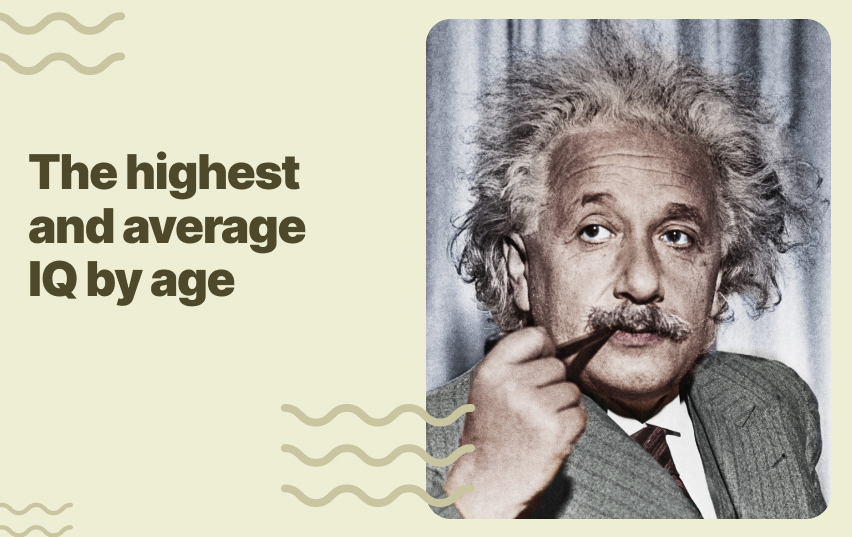 One of the important elements to bear in mind while evaluating an IQ score is the age of the individual who took the test. Different scores mean different factors depending on people’s age.
Various IQ tests are available, but they all use the same scale. The main idea of creating IQ was born by Lewis Terman, an American psychologist and author. Terman designed IQ tests and the scales necessary for analyzing different scores.

You are not born with IQ; it is something you can develop over time. Intelligence quotient will change with age, and your IQ can keep increasing as you age which means, as you get older, you can think more comprehensively and solve more challenges. This article will explain the IQ ranges by age and their effect on your daily life capabilities, such as learning and performing.

How Accurate Is The Data?

Scores gained through IQ scores should be considered skeptically, but it is always good to consider them when necessary.

There needs to be actual data organized by age. Still, some information about different age groups is available that can be used only for casual purposes because they are not entirely authentic or the information might not be up to date. Only some data is available for people between 16 and 74 years old.

The reason is that usually IQ tests are not suggested for younger children except if a psychologist recommends it. Considering all these facts, below are the average scores on the IQ scale for different age groups.

Does IQ increase as we get older?

The French psychologist Alfred Binet invented the first IQ test in 1905. Binet arranged a group of tests to recognize children with learning difficulties who were the first candidates for child-centered education.

Most IQ tests measure an individual intelligence on a scale of 100. The highest possible IQ score is 145, and the lowest is 61. The scores between these two numbers describe a standard deviation about the meaning of IQ for a defined group.

For example, if you receive 110 scores on an IQ test, your IQ score is 10 points higher than an individual’s average score. Also, if you gain a score of 67, you are 11 points below a person’s average IQ.

The Flynn effect and average IQ by age

The Flynn Effect explains how the average IQ of people can grow over time, and it was first invented by a researcher named James Flynn in 1984. This research was dedicated to improving education, nutrition, mental health, and academic performance. A study was done by a team of researchers at the University of California.

Individuals with a developing perspective think they can improve their intelligence with more hard work. They believe they can reach this result with a persistent mindset even when they have lower IQs than others. The reason is that they accept the obstacles and consider them as opportunities to learn something new.

IQ tests mostly measure an individual’s score on a 100 scale. The highest score for IQ is 145, and the lowest IQ score is 61; scores gained between these two numbers usually display a standard deviation of IQ definition for that specific group.

IQ is about hypotheses and analysis. Tests are invented to measure an individual’s reasoning skills, with three main elements: Performance IQ, fluid intelligence, and crystallized intelligence. IQ tests can measure your IQ level without considering many other complicated criteria. IQ tests only analyze some aspects of intelligence, such as education level, age, or sex, among other things.

The average IQ score differs between countries and different age groups because tests are designed with different methods, and each country or age group has different standards for defining an average score. There are examples of people who scored 55 or less on a test but gained an excellent score on another test in a way that you can consider them gifted.

How to Increase Your IQ

People with the highest IQs in the world