People with the highest IQs in the world 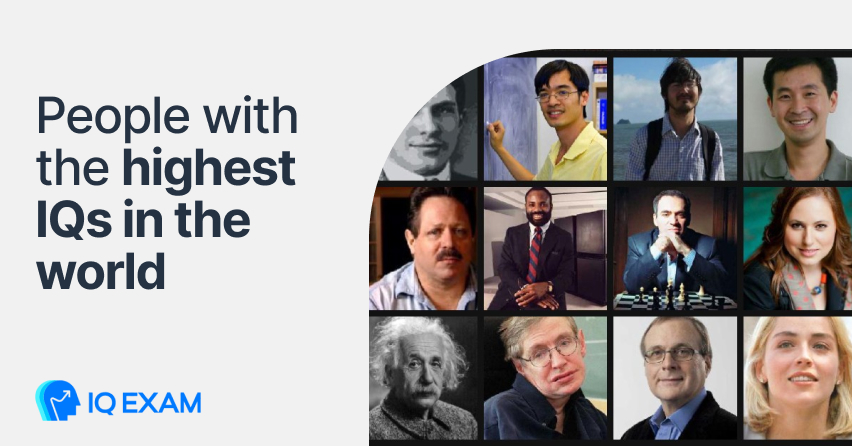 Who has the highest IQ?

It might seem challenging to measure intelligence level, and it is. But intelligence tests are trying to calculate a numerical value that can represent the level of our brainpower and determine who is the most intelligent person in the world. No standard IQ test is available, but the results and numbers are almost identical in different tests, meaning 100 IQ is considered an average IQ. Anyone who gets a 140 IQ or above is regarded as a genius.

It might sound surprising, but if you are suspicious about someone’s IQ score, you have every right to, even Albert Einstein’s. Usually, his IQ is quoted in different resources and texts as 160, but this is just a guess.

It is even possible that he never participated in an intelligence quotient test. IQ tests have just appeared recently, and there is no definite way of understanding who has the highest IQ. Aside from all assumptions, we would like to talk about some people with the highest IQs in the world; some even have IQs higher than Einstein’s.

Jacob Barnett with a 170 IQ score

Jacob Barnett is an American Physics student and a previous child genius born in 1998. He has had autism since he was two years old. Jacob was very slow in learning, and it was hard for him to respond as fast as other children; it was clear he had some significant problems at school. His mother made an appointment with a professional to understand what was happening.

Then he was disguised with autism, and doctors determined that Jacob would never be able to do the basic things of his daily life, such as tying his shoes. But he surprised everyone, moved on against all the odds, finished grades 6 to 12 in just a year, and entered college when he was 10.

Jacob published an article in a well-known scientific journal at 11 and ran a Ted Talk stage when he was 13. Currently, he is a Ph.D. student. His mother also wrote a book about his son’s life called The Spark: A Mother’s Story of Nurturing Genius.

Judit Polgár with a 170 IQ score

Judit has defeated many chess world champions, such as Anatoly Karpov, Boris Spassky, Vladimir Kramnik, and Veselin Topalov. His IQ is registered as 170. She declared her retirement in 2014 from chess, receiving an award of Grand Cross of the Order of Saint Stephen of Hungry.

Evangelos Katsioulis with a 198 IQ score

Evangelos Katsioulis is one of the most genius people in the world. He managed to get high scores on multiple tests.

Evangelos is a physician and psychiatrist from Greek and has an IQ of 198. He earned MD, MSc, MA, and Ph.D. degrees. He is also the creator of the World Intelligence Network, an international high-IQ community organization.

Adhara Perez with a 162 IQ score

Adhara Perez was diagnosed with Aspergers when she was three years old. Prez was struggling with learning and fell asleep in the middle of class; she didn’t want to be in the class, and she was also bullied a lot at school, and many people called her “weirdo.” Prez took an IQ test when she was eight years old, and her score was higher than Einstein and Stephen Hawking.

On the other hand, the university of Arizona offered her a scholarship. She is also cited as one of the 100 influential women of Mexico by Forbes. Her main goal is to work for NASA and visit space.

Marilyn Vos Savant was born in Louis, Missouri, in 1946. She took an adult IQ test at age 10, and her IQ score was 228. Due to this result, the Guinness Book of World Records registered her name. The IQ category was removed from Guinness Book in 1990 because IQ results were considered undetermined.

Marilyn is a journalist, author, and lecturer. She has been responsible for the Q&A section for Parade magazine readers in her exclusive column since 1986. She has one of the highest IQs in the world based on the intelligence quotient scale.

Rick Rosner with a 195 IQ score

Rick Rosner took more than 30 IQ tests; his IQ scores were between 192 and 198. Before working as a TV writer, he worked as a stripper and nude model. He is one of the most intelligent men in the whole world.

Sho Yan was one of the former genius children and an American doctor. She was the youngest graduate of a Doctor of Medicine from the University of Chicago in 2010. Yona entered college when she was nine and started medical school at 12.

Yano knew how to read and write when he was two years old. He was also able to write music when he was five years old. When he turned 21, he obtained MD and Ph.D. degrees. Yano has an IQ of 200.

Ainan Cawley with a 263 IQ score

Ainan Cawley earned an IQ score of 263 when he was 21. He started participating in chemistry courses at Singapore Polytechnic when he was eight. At 9, Ainan could memorize the first 518 statistic points of pi.

He started working in the film industry as a composer when he was 12. By the way, he wrote, directed, and edited his ” Sempiternal ” film in 2013. Also, he wrote the script and made music for a short film called “Reflection” when he was 12. Ainan has an IQ of 263.

Michael Kearney with IQ score between 200–325

Srinivasa Ramanujan with a 185 IQ score

Srinivasa Ramanujan is one of the exceptional mathematicians of India. He was born in 1887 and was a genius child in mathematics.

He didn’t have access to professional mathematic resources, but he reached the highest level of his field. He had no friends at school because no one understood his intelligence. Srinivasa has an IQ of 185.

Barnaby Swinburne with a 162 IQ score

Barnaby Swinburne is 12 years old and from Bristol. Barnaby obtained the necessary score for the Mensa test, and his result was more than extraordinary. Barnaby became a member of Mensa with an IQ of 162, which is higher than Albert Einstein’s IQ of 160. He took the IQ test in two steps: in the first stage, he was in the first percent, and in the second stage, he was in the top four percent of the world population.

Moreover, it is crucial to understand that there were always many arguments and controversies about IQ scores. Even some people criticize IQ scores as they believe it is just fake news and numbers for making false claims. Not to mention that many old succeeder’s IQ scores, such as Newton, Da Vinci, or Einstein’s, are just estimated and need to be measured.

The highest and average IQ by age